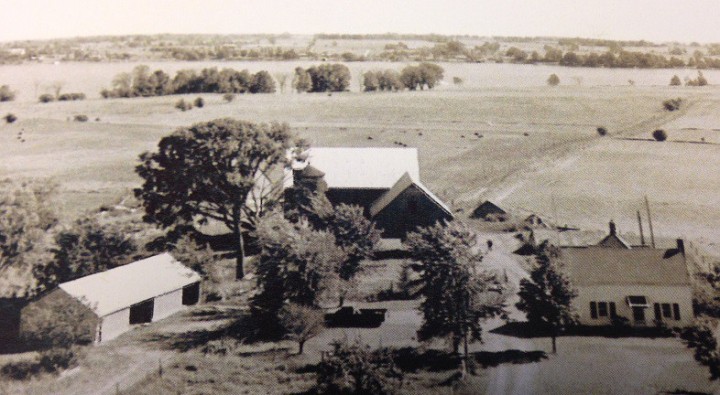 Architectural Description:
The Way House is a frame farmhouse that is now covered over with aluminum siding.  The 1 1/2 storey centre gabled kitchen tail was probably the original house.  Under the siding it is constructed of logs.  It is attached to the south end of the main block.  The main block is also 1 1/2 storeys.  The roof of the main block is end gabled and of medium pitch.  There is a single new brick chimney at the west gable end.  All the windows in the main block are new.  In the main (north) facade there is a 1 light per sash window on either side of the plain trim door.  The awning over the door and the shutters are new.  On the east side of the main block there is a large picture window in the lower storey and two 1 light per sash windows in the upper storey.  There is a small recent porch addition on the lower storey.  There is one window on the south side of the main block and on the west side there are two upper and two lower storey windows.  The east facade of the kitchen tail has been largely obscured by a closed in porch.  There is a medium pitched centre gable with a window in it.  On the south side there is one window above the garage.  The west facade of the kitchen tail also has a medium pitched centre gable with a window in it.  There is a lower storey window and a porch addition.  It is quite difficult to tell what the original house looked like since it its covered with siding and so many changes and additions have been made.  The interior walls of the kitchen tail are very deep which leads one to believe that it is probably constructed of logs.

-Previous information from a survey done sometime before 1987