My grandmother’s family, the Belknaps, used to hold a family reunion every year in Ohio. At first, it was for the descendants of the Belknaps and the Clarks (the descendants of my great-great grandfather Arthur Belknap, and those of his sister Lucina and her husband John Q. Clark). My grandmother (and her mother before her) used to keep track of names, birth and death dates in booklets she handed out to every family represented at the reunion.

In the Sept. 11, 1942 issue of the Adrian (MI) Daily Telegram, there is a short article titled “Clark-Belknap Families,” which states:

In the 1985 booklet, she wrote, “Our reunions have been going on since 1950, your Historian has attended reunions since they first were organized in 1925, under the title of ‘Belknap-Clark Reunions’ which were disbanded in 1955, after the death of Arthur Belknap.” I think she was saying the Belknap-only reunions started in 1950.

In the 1974 booklet, she wrote, “In the year of 1949, Arthur F. Belknap decided a record of his ancestry would be nice to have to hand down to his descendants. He contacted a lawyer friend of his and eventually the following record of ancestry was give to him.” Arthur was in contact with Glen W. Evans of Lansing (a genealogist, not sure if he is the lawyer friend mentioned above), who wrote a book titled “The Belknap Family” in 1949. In a letter to Arthur dated October 5, 1949, Mr. Evans listed Arthur’s ancestry from Abraham Belknap to his father Thomas Belknap. He ended the letter by saying, “Keep well and take care of yourself and I will try to make the Belknap Reunion next year at Adrian, Mich. where I may be able to tell you more about this branch of the Belknap Family.”

In 1980, the reunion celebrated it’s 30th anniversary. Here are my grandmother (back row, second from left), her one brother, and her seven surviving sisters (one had died in 1977). 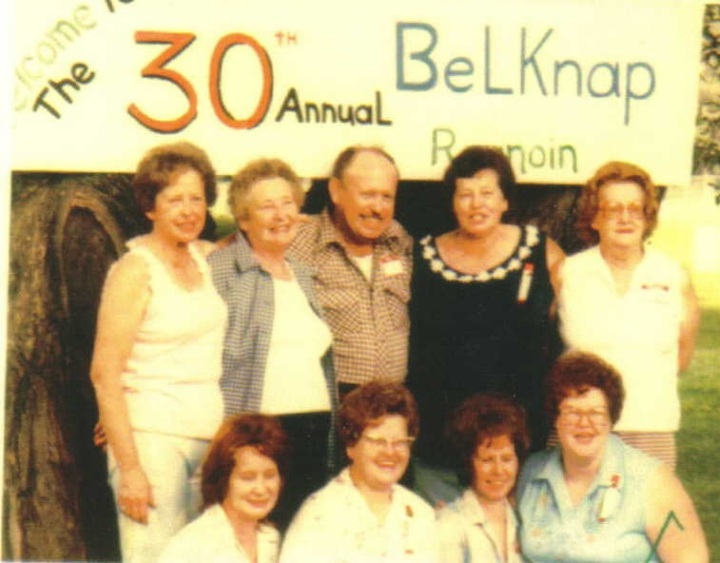