While researching my maternal grandmother’s surname, Oakes, I discovered that the original name was actually spelled Ochs.  Her grandfather’s name was Heinrich Ochs (or Henry Oakes).  He had a son named William Oakes, who is my great-grandfather.

Heinrich had a brother named Conrad, and Conrad also had a son named William, but he went by the last name of Ochs.  William F. Ochs is the focus of this blog.  He was born January 28, 1880 in Michigan.  He married Amelia Hartwig Hamilton on August 14, 1911.  Amelia (born 1871) had previously been married to Herman Hamilton and had 7 children with him.  Herman died in 1903.

According to a January 16, 1913 Detroit Free Press article titled ‘See Stepfather Slay Wife; Then End His Own Life,’  Amelia’s 2 youngest children, Florence and Ella were at home with their mother when William came home to their farm in Dearborn after a two-week bender.  He had a shotgun and shot Amelia in the head as she was trying to escape out the back door.  He then went out on the front porch and shot himself in the head.  The two girls ran to a neighbor who then notified the sheriff.

Here are images of their death certificates from the Library of Michigan.  The inquest ruled it a murder/suicide. 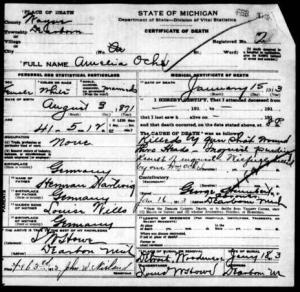 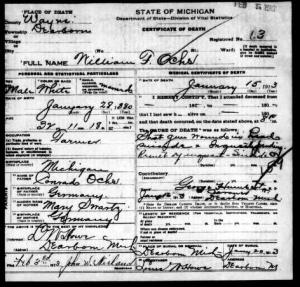